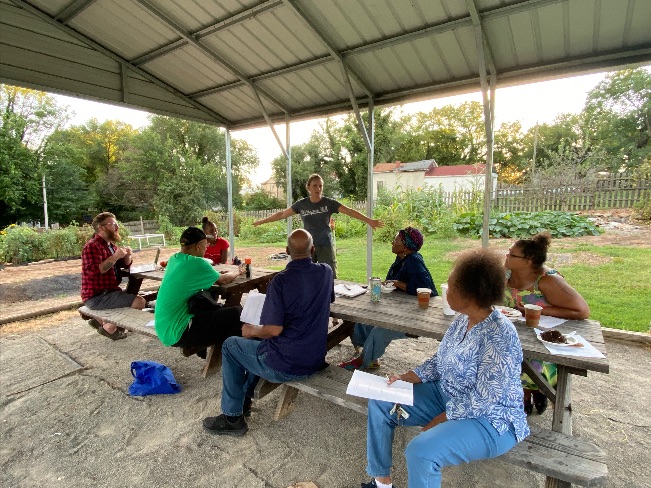 What do you get when you gather 10 neighbors and gardeners in a community space and ask them to brainstorm what they'd like to see in their garden?

Throughout August and into September, a cohort of Hurt Park neighborhood  residents and community garden members met, shared food, got to know each other -- and dreamed about what the Hurt Park Community Garden might become.

It's already a verdant place, with apple trees loaded with fruit, and garden plots overflowing with Japanese eggplants and taro and pumpkins and peppers and herbs and flowers and bees.

But asking the question: What would you want? Then inviting a landscape designer to come and listen. It got the creative juices flowing.

What if there were a play space dedicated to kids? What if there were activities for teens? What if garden beds could be lifted up so that the elderly wouldn't have to bend down to dig? What if there were a climbing structure for kids that could double as a trellis to plant cucumbers and squash up against? What if simple containers were scattered through the space -- not only to increase the amount of growing, but also to teach people how to grow food in containers on their own decks and patios?

What if we built a fire pit? Put solar panels on the shelter roof to allow for electricity? Created a large chalk wall so that gardeners could leave each other messages -- or drawings? Not all of the dreams will become a reality. There are always funding challenges. But some will. In fact, some already have.

The redesign team chose a few small projects to begin with, ways to build on the relationships developed through the planning process. The first was to host a simple apple harvest party. On a recent Sunday, about 10 people showed up and picked from the trees as much as they could carry. Success! Last Saturday, the group hosted a garden walk, an event where anyone interested in seeing the garden could come in, ask questions, hear from the gardeners themselves. In the future, the group is working to create a sign that not only names the garden but explains why it's there and how it can be for everyone.

The aim is to tie this space more tightly to its community. With each event, they are on their way.